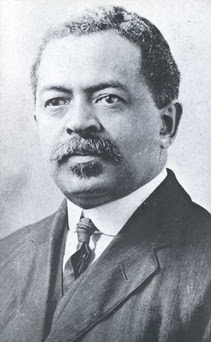 On November 9, 1901, William Monroe Founded The Gaurdian Newspaper In Boston, Massachusetts. At The Time Of Its Inception, Some 150 Black Newspapers Were Being Founded In The Unted States.

Trotter Was One Of The Few Black Newspapermen Who Was Publicly Opposed Booker T. Washington's Social Theories Regarding The Advancement Of Black Americans. He Agreed, Completely, With W.E.B. DuBois' Opinion That Washington Was "leading the way backward with his sub-class rhetoric."

Along With DuBois, Trotter Was One Of The Leading Organizers Of The Niagara Movement, Which Called For, Among Other Things, Strict Enforcement Of The Constitution And The Protection Of Voting Rights For Black Americans. The Niagara Movement Was The Forerunner To The NAACP. And Because He Had Such A Profound Distrust Of "White Folks," Trotter Was Conspicuously Absent From The Founding Of The NAACP in 1909.

The Harvard University Graduate Is Considered By Many, The "Forefather Of Black Militants."

"In Order For Black History To Live, We Must Continue To Breathe Life Into It." -- Hubert Gaddy Jr.

Posted by ExhaleBabs at 11:16 AM No comments: 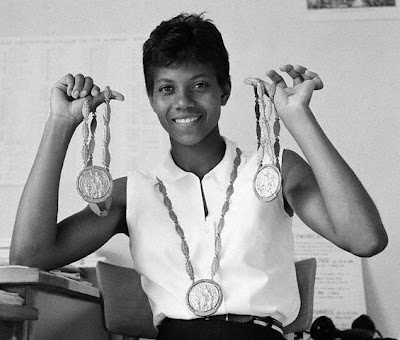 Interesting Facts: When Wilma Rudolph was four years old, she had a disease called polio, which causes people to be crippled and unable to walk. To make matters worse, her family was poor and could not afford good medical care. She was from a large family. She was the 20th child of 22 children. Her father was a railroad porter and her mother was a maid.

The doctors had said she would not be able to walk. Her mother took her every week on a long bus trip to a hospital to receive therapy. It didn't help, but the mother was told that Wilma legs should be massaged everyday. The brothers and sisters were taught how to do it, and they also rubbed her legs four times a day.

At the age of 8, she could walk with a leg brace and eventually she used a high-topped shoe to support her foot. Despite this, Wilma played basketball with her brothers everyday. Three years later, her mother came home to find Wilma playing basketball by herself bare-footed.

A track coach encouraged her to start running. In her senior year of high school, she qualified for the 1956 Olympics in Melbourne, Australia. At the age of 16, she was the youngest member of the U.S. team and won a bronze medal in the sprint relay event ( women's 400-meter relay).

1960 Olympics held in Rome, she won the 100 meter, 200 meter, and sprint relay events, setting a world's record in the 200-meter race. Despite a sprained ankle, she helped her team to win another gold medal for the 400-meter relay!

After retiring from competition in the early 1960s, Rudolph worked as a teacher and a track coach. In the 1980s, she was inducted into the U.S. Olympic Hall of Fame and established the Wilma Rudolph Foundation to promote amateur athletics. Rudolph died on November 12, 1994, near Nashville, Tennessee, from brain cancer. In 2004, the United States Postal Service honored this Olympic champion by featuring her likeness on a 23-cent stamp. She is remembered as one of the fastest women in track and a great inspiration to athletes everywhere.
Posted by ExhaleBabs at 1:35 PM 3 comments: 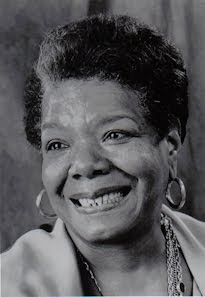 Maya Angelou, through her powerful writings, has inspired generations of women, African-Americans and all people who struggle to overcome prejudice, discrimination and abuse. Throughout her life, Angelou has defied social norms. After being raped by her mother's boyfriend, she withdrew and was mute for five years. However, encouraged by her grandmother, who introduced her to literature, she gradually emerged as a talented artist. Her diverse career includes being the first black streetcar conductor in San Francisco. In 1954, Angelou turned to acting before she started writing while also working as northern coordinator and fund raiser for the Southern Christian Leadership Conference. In the 1960s, Angelou began to focus on her writing and, in 1970, her first autobiographical work, I Know Why the Caged Bird Sings, became a best seller and was nominated for a National Book Award. Angelou's writings have altered society for the better, bringing greater diversity into the theater and literature. Her autobiographical works provide powerful insights into the evolution of black women in the 20th century. In 1971, she became the first black woman to have a screenplay produced as a film -- Georgia, Georgia. Her writings have brought her numerous awards and have been nominated for a Tony Award, an Emmy Award and a Pulitzer Prize.

At age seven, while visiting her mother in Chicago, she was sexually molested by her mother's boyfriend. Too ashamed to tell any of the adults in her life, she confided in her brother. When she later heard the news that an uncle had killed her attacker, she felt that her words had killed the man. She fell silent and did not speak for five years.

Nightclub singer; She toured Europe with a production of the opera Porgy and Bess in 1954 and 1955. She studied modern dance with Martha Graham, danced with Alvin Ailey on television variety shows and recorded her first record album, Calypso Lady (1957).

She served as an instructor and assistant administrator at the University of Ghana's School of Music and Drama, worked as feature editor for The African Review and wrote for The Ghanaian Times and the Ghanaian Broadcasting Company

Maya Angelou returned to America in 1964, she worked closely with Dr. Martin Luther King, Jr. His assassination, falling on her birthday in 1968, left her devastated. She found solace in writing, and began work on the book that would become I Know Why the Caged Bird Sings. The book tells the story of her life from her childhood in Arkansas to the birth of her child. I Know Why the Caged Bird Sings was published in 1970 to widespread critical acclaim and enormous popular success.

Born in 1947, she did not use speech to communicate until she was nearly five years old. Through the determination of her mother, she went to a normal school though at the time such children were often placed in mental institutions. Autism was thought to be a psychological problem, not a biological or neurologic disorder, causing the child to focus inward and to ignore or reject outside stimuli. It was thought that there was no bridging the gap between the autistic child and the world. After a barrage of therapy and with great difficulty, Grandin managed to graduate from high school. She had spent time on a ranch and had become fascinated with animal behavior after long sessions of watching the cowmen work with the herds. She earned a B.A. at Franklin Pierce College in New Hampshire, an M.S. in Animal Science at Arizona State University, and a Ph.D in Animal Science from the University of Illinois. Today she teaches courses on livestock behavior and facility design at Colorado State University and consults with the livestock industry on facility design, livestock handling, and animal welfare. In addition, she writes widely about autism and her life experiences and efforts to live a functional, purposeful life.

The Temple Grandin Movie: Life Story of Dr. Grandin an autistic woman who over came all sorts of obstacles to rise through academia and finally achieve a Ph.D. She is animal expert and an engineer. She sees in pictures and has a photographic memory.
Posted by ExhaleBabs at 12:02 PM No comments: