Making Your Coffee A Healthy Choice!

Who do you know who drinks coffee, tea, or hot chocolate at least occasionally? If I told you that you could make money just drinking and sharing coffee, would you believe me? Organogold has made it possible for the average person to WIN… It's the SYSTEM put in place by our Amazing Leaders that if followed can truly set you FREE!!! SYSTEM = Save Yourself Some Time Energy & Money…

Freedom in a Cup: 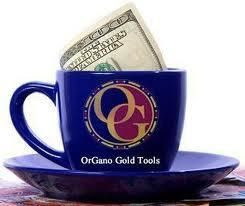 Organo Gold's mission is to improve the health, wealth, and balance in people's lives by sharing the knowledge of a healthy alternative to regular coffee. Organo Gold Coffee features the only 100% certified organic ganoderma lucidum! The number one herb in the Chinese culture for health benefits. A super powerhouse!

The Miracle of Ganoderma - Once it was so rare, so hard to find, and therefore so expensive, that only kings and emperors could afford it. The places where it could be found were closely guarded secrets, and stumbling across one was the ancient equivalent of winning the lottery. Known as red reishi in Japan and lingzhi in China. Ganoderma is grown in the highest most pristine Chinese mountains of Wuyi where virgin rain forest literally surrounds the areas, which provides a pollution-free environment, which is ideal for that cultivation. So, with knowledge of the benefits of this Magical mushroom, it began to spread throughout the world and eventually it became the key health ingredient in Organo Gold's coffee, teas, hot chocolate, and other products. Today, virtually anyone can enjoy its benefits as they sip their Organo Gold coffee or tea. The benefits of Ganoderma Lucidum also known as the 'King of Herbs' are available as fast as you can boil water. That's exciting.

When you consume Ganoderma, it's like a smorgasbord for the body. It has more than 200 nutrients and active elements, and the body's higher intelligence -- innate intelligence -- knows exactly what to do with it when it is consumed. You don't have to worry about it; just get it in you. Everybody's body has different imbalances, i.e., hormone or immune system. Ganoderma has the ability to regulate hundreds of imbalances to help the body normalize. That's pretty cool; and because coffee or tea delivers the Ganoderma so fast, the body can quickly do many things with it. 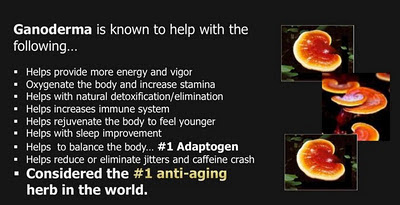 The concept of using coffee to market Ganoderma is a master stroke of genius. Not only is coffee popular, it's universal. What that means is that we have a virtually unlimited worldwide market; and, the perfect vehicle for "Bringing the treasures of the earth to the people of the world."

That's the genius of coffee!!

To your good health,


"If you ever wanted to win in business, ever felt like you were special, that you deserve so much more, then I believe you found a home here."
Posted by ExhaleBabs at 4:03 PM No comments: